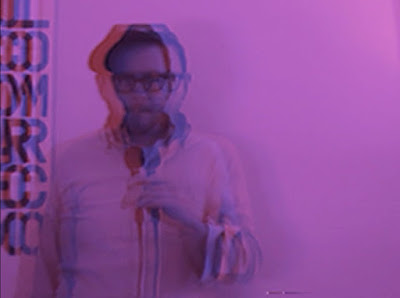 Untitled (Just Kidding) is an ever-evolving suite of films and performative interjections made over the last half decade.The works play in creative reading, studied density, the one-(hundred)-liner, choirs, screen texts, the bootleg, the cover, jokes, speculative etymologies, accents, loops, the cinemagical, body swaps, poetry, citation and human voice. Conceptually engaged, language-intensive and visually mesmerizing, the suite scrambles somewhere in the intersects of conceptual comedy, dizzying illogics, the poetic plu-future and sustainable sourcing. Through deliberate mistranslation and strategic denaturing of languages and codes, Malmed revels in and reveals their extra-communicative potential as sound, as image, as object, and shift audiences’ concepts of the show, of the cinema.Screening to include collisions and confoundments between textual forms—written, spoken, sung and otherwise enunciated; variations on versioning; shifting registers of spectatorial engagement; jokes that are poems that turn out to be videos. Unexpect the expected.

Jesse Malmed is an artist and curator living and working in Chicago. His work in moving images, performance, text and occasional objects has exhibited widely in museums, cinemas, galleries, bars and barns, including recent and upcoming solo presentations at the Museum of Contemporary Art Chicago, San Francisco Cinematheque, Microlights, Echo Park Film Center, and the University of Chicago Film Studies Center. His platformist and curatorial projects include the Live to Tape Artist Television Festival, programming at the Nightingale Cinema, instigating Western Pole, the mobile exhibition space and artist bumper sticker project Trunk Show (with Raven Falquez Munsell), programming through ACRE TV and organizing exhibitions, screenings and performance events both independently and institutionally. Originally from Santa Fe, he earned his BA from Bard College and his MFA from the University of Illinois at Chicago, where he currently teaches. www.jessemalmed.net